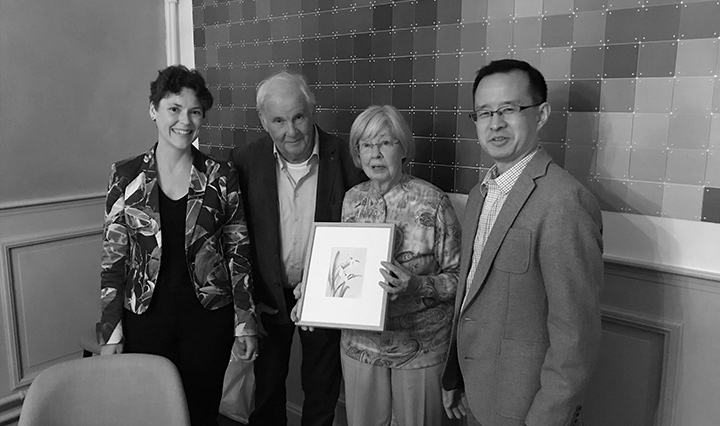 Photo of Emmy (from left to right the third),
taken by Frederic Lens during 2019 meeting in Leiden, the Netherlands.

Emma van Nieuwkoop (for friends Emmy) passed away at her home in Oegstgeest on 12 January 2022 at the age of 88. Emma's role in the IAWA started in 1977 when the IAWA Office had moved from Syracuse, NY to Leiden, and the IAWA Bulletin had to be produced in-house in the Rijksherbarium, the new hosting institution. Emma, a high level secretary of the institute accepted the challenge and developed text and lay-out editing into a fine art in the 43 years she produced firstly the IAWA Bulletin, then its new Series, and from 1991 onwards the rebaptised IAWA Journal. In the process she mastered the quickly evolving techniques from composer typing with text stored on magnetic cards to sophisticated computer software lay-out packages. In 2019, her last year as desk editor she produced the Jubilee Volume 40 of 882 pages, and including three beautifully executed special issues on wood formation, fossil woods and cell wall ultrastructure. For many years she also served as financial administrator and membership secretary of our Association. In that role she was enormously helpful to many members, especially those who experienced problems with international money transfers. She made many long-distance friends in our IAWA family. Her great services to the IAWA were recognised in 2005 when the IAWA Council elected her an Honorary Member. A well-deserved honour which was awarded during the IAWA Social Hour at the XVII International Botanical Congress in Vienna. All her work for IAWA and its members was truly a labour of love. We will miss her very much.